My Life With Sadie (My Reactive Dog) 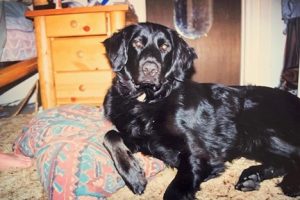 In May 1996, I went to the local animal shelter in Napa, CA just to look at dogs. I was getting married later that year and my fiancé and I wanted to get a dog together. I was looking for an “easy” lab or golden retriever. Of course, there were no labs or goldens but they did have a Flat Coated Retriever there and the staff told me that if she was not adopted that day, she would be euthanized the next day. So, of course, I don’t have to explain that we adopted her that day.

Sadie had some mild anxiety when we brought her home but overall, she was a loving, sweet girl. She never met a human she did not like, and she seemed to be ok with the few dogs she interacted with. We lived in fairly good harmony with Sadie for about a year. In July of 1997, we adopted a Jack Russell Terrier we named Buster. Sadie and Buster seemed to get along quite well, until, well…. they did not.

Approximately 6 months after adopting Buster, I got a call from my roommate while I was at work. She was hysterical and said that Sadie had attacked Buster for no reason. He was ok but had some scratches on his neck. Since no one saw how or why it started, we thought it may have been a one-time squabble. That was not the case….

For the next 14 years, I had to manage Sadie’s aggression towards dogs. We had to manage any trigger that could cause Sadie to attack another dog. She wore a gentle leader anytime we went on a walk or if we were around other dogs. Sadie was a challenge because she did not bark or lunge when she saw other dogs; she would actually initiate play but suddenly something would snap in her mind and she would attack. Over the years, I learned that she would resource guard, so we removed toys from the house. I learned that if a dog looked at her sideways (like a whale eye), she would attack. I also learned that she would stiffen before she attacked so, if I was present and fast enough to react, I could interrupt her.

Living with Sadie was stressful. Buster was attacked many times before we learned the best way to manage her. She attacked my brother’s dog and my best friend’s dog. Eventually, we just never gave her the opportunity to attack a dog; we were always vigilant when Sadie was around another dog. Sadie’s saving grace was that she loved people and eventually became an amazing therapy dog, especially for kids.

At the end of Sadie’s life, she had learned to put herself in a crate when she was stressed (anytime I saw her stiffen, I would send her to her crate, which was a safe place that she loved). In her old age, she was less reactive – I think she just was too tired to be bothered, plus we spent years helping her manage her stress and anxiety. Although I was sad when Sadie passed, I also felt a sense of relief that I no longer had to be hypervigilant.

Because I work with reactive dogs often, I created Truly Force Free Animal Training Reactive Dog Rehabilitation Course as well as our Understanding & Helping Your Reactive Dog Webinar to help you when you are not able to see a behavior consultant or behaviorist right away.

Dog Behavior and Training – Important Lessons from the Presidential Election